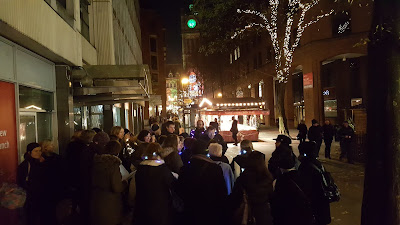 This time we are in Brazenose Street. It is the coldest day of the winter so far and warm clothing is more important than uniform. It’s dark, anyway, and no-one will notice the pale fluffy jumper and the dark-grey striped trousers. There are a few fairy lights and purple hats anyway. Our feet and the tips of our fingers freeze but the words and the tunes come out nevertheless.

We sneak in a few others: Can’t Help Falling in Love, I Will, Here Comes the Sun, and Here, There and Everywhere / Long Winding Road. Well, why not? It’s what we do.

A group of ladies stop to watch. They are very appreciative and even join in one or two. I wonder whether they’re part of a choir. When they’re not actually singing, they’re moving to the music.

We keep going for the full hour and half with just a ten minute break.
“Last song!” says Jeff before I Will.

“We ought to finish with a Christmas one,” says an alto.

Then comes Carol of the Bells, followed by O Little Town of Bethlehem and Once in Royal David’s City. So we do finish full of Christmas spirit.

All 30+ of us then make our way to a nearby restaurant for the annual meal out. It’s great to warm up again and eat drink in good company. There is much chat and laughter and a few origami Christmas trees….
But we’re not done yet. There is more: 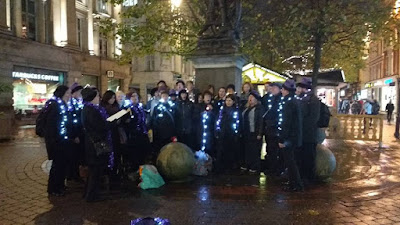 It’s always fun to be around the Manchester Christmas Markets. The Gluhwein and hot chocolate are tempting. Do they make us sing better though? Well my paternal grandfather used to go round the Black Country pubs, playing his fiddle and singing and he used to swear a by gargling red wine before he set out. My own father recommended this to me.

Some was definitely swallowed tonight.

Anyway, there we all were, dressed like Christmas trees in our purple tinsel, hats and fairy lights. It seemed to work. The hot chocolate can be a bit too milky sometimes, but it didn’t seem to do any harm; the general public stopped and listened and even clapped.

Mind you, Jeff needs to be a bit careful. A little lad in a yellow jacket and hat almost did him out of a job. The same little lad’s finger clicking was spot on in Holly Jolly.

Yes, it was good fun despite it being a little damp and cool.

Then it was back to Ordsall for an almost full rehearsal of our other repertoire. 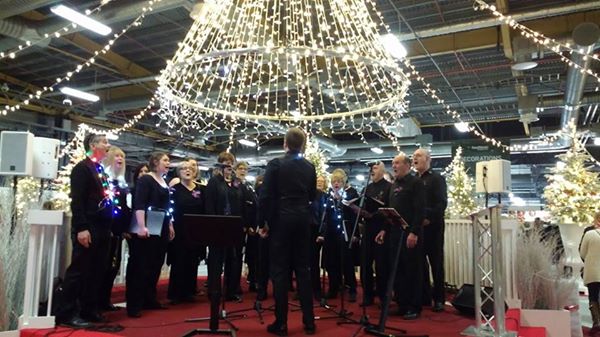 Event City, Manchester, near the Trafford Centre.  We have an early start for a Sunday: 10.00 a.m. and we need to be at the bandstand by 9.30. For some reason my sat nav always drops me a couple of blocks away and then I can’t quite remember where it is from there.

“Just along there and under the bridge, and to your left,” says the man tidying up the trollies in the car park.
Yes, might have it fixed now.

Most of us arrive early.  There’s always a concern about parking and they’re not letting ordinary folk park immediately behind the venue. Many of us are quite canny and park further away where we can get out easily afterwards.

It’s out first official Christmas gig. Lighting the Legend, Bonfire Night, Remembrance Day are all done now. It’s time to get out the fairy lights and the purple tinsel. Artificial snow on our boots and strings of lights round our necks get us in the mood.

The visitors to the event have to file past the bandstand before they get to the stalls. Various choirs have thirty minute slots. There are choirs that are bigger than ours and choirs that are smaller than ours. Tenor Colette sings immediately before us and after us with another choir. A couple of friends of tenor Bev perform immediately after our final slot.

It’s a joy to sing these songs.  We offer:
and beautiful Basque carol The Infant King that doesn’t quite fit into any category.

We’re amazed and delighted that the general public actually stop and listen on the way in. They even clap. Other choirs watch and support and we hope we do the same for them, too.

We have three slots:  10.00, 12. 30 and 3.00. So, there is plenty of time for socialising, shopping and watching the other performances. First mince pies of the season are consumed.

Savvy alto Sue suggests Café Valerie as a suitable place to get lunch before our final set. It works beautifully. The talk is of horses, dogs and flowers. Naturally. Why wouldn’t it be?

What’s not to love about belonging to a choir? Hard work, yes, but such fun singing and socializing.
Posted by Gill James at 01:13 No comments:


“They went with songs to the battle, they were young
Straight of limb, true of eyes, steady and a–glow”
(Opening of Honour 1V, Andrew J Smith) 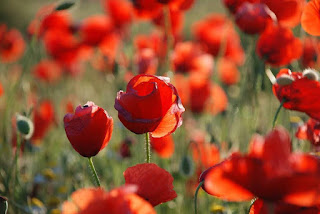 We provided the second half of this very special evening. Quite a few of us are in both choirs but those who aren’t were able to sit and enjoy this rather inspiring concert, In Remembrance. The Honour Choir    was formed originally for a large scale event that took place on 2 August 2014. Read all about it on their web site. Unusually, this choir does not meet every week for a couple of hours like most but meets every six weeks or so for a four hour rehearsal. Success is dependent on members working on their own and learning pieces quickly.

And successful they were.

This very special concert was enhanced by the spoken word parts written by Honour choir member and soon-to-rejoin Ordsall A Cappella Singers Christopher Bowles. This included letters between a young man and his fiancée, a meeting with Edith Cavell just before her execution and the story of one family whose relation went missing in action. Particularly touching was the letter from the solider of his longing for colour. Chris performed this rather than just reading it. All of the readers in any case did more than merely read. Extremely moving as well was when choir members shouted out the names of local soldiers who had fallen in the Great War.
The songs weren’t necessarily the usual ones that make up Remembrance Services although we heard Abide with Me, Ave Verum, and In Remembrance. We also heard Blue Skies, Fix You and Wonderful World. We know most of the songs though two especially composed ones, The Somme and the Ancre and Honour 1V were unfamiliar to us and particularly dramatic and appropriate for the occasion.

After a brief pause for tea and biscuits it was our turn. We whizzed through a fair bit of our normal non-Christmas repertoire. By this time, the Honour Choir members who are not also in Ordsall A Cappella Singers sat down to watch. It is so good having another choir urging you on. They are so appreciative and encouraging. Jeff got the audience doing a couple of things. Again, choir members were useful.

During the interval I met someone I knew. I hadn’t known he was going to be there. “Thank you for coming,” I said. “How did you find out about the concert?”

So, it works.
We had a respectable audience. There’s room for more. No doubt there will be soon.
We used Brunswick Parish Church, which is where Honour normally rehearses. Ordsall has used it a couple of times as well both for concerts and rehearsals. It’s a friendly place and this also helps to make the event successful.

Tomorrow, I’ll post about what else we did at the weekend.