Whip-cracking Away with Family and Friends 16 January 2016


So, what better to do on cold January evening than come along to our Friends and Family concert held at Brunswick Parish Church, which several choir members attend?  Oh, yes, the sleet began to fall just as we all set off but the church was warm and cosy and a friend or two or three or four came along. 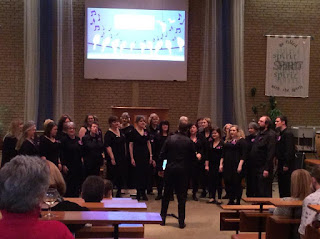 This is now the third Friends and Family concert we’ve offered.  Always free and always with cake. We’re torn. At Brunswick Parish Church, it's easier to stay longer, lots of room, but it will probably have to be a Saturday or Ordsall Hall, very Ordsall, rather romantic, we have to leave promptly and it can only hold a smaller audience but we can use it easily enough on a Tuesday.  Let us know what you think by adding a comment here.

My goodness weren’t our top-up acts something?  Daisy, also one of our talented young sopranos but an established artist in her own right, offered two fabulous solos.  Ella presented some lesser-known Ralph McTell numbers. The Mad Donnas were as professional as ever. John (aka Elvis, Clint, Superman and many others) told his stories of RALPH and other dog-turd lifting machines.  (Yes, that’s right). Not to mention the whip-cracking cow-girl, Marilyn, who turned our musical director into a cowboy, our secretary into a show-girl and one unsuspecting bass – we think actually our chairman had been the target – into an Indian Chief. We enjoyed singing and we think our audience enjoyed listening. Naturally we paraded the four – five songs we’re entering for the ManchesterAmateur Choral Competition (MACC). “I got a bit bored,” said Jeff in our rehearsal on Tuesday, “of being told how much people liked R …..” So, that’s a big thumbs up for  R …. then. (Aha, under wraps until after the MACC --- unless we’ve put you in the know.)
We also trotted out parts of our older repertoire some of which we’d not touched since November and we were pleased to note that we still know these pieces.

It all felt very good.

Then, of course, there was the cake. 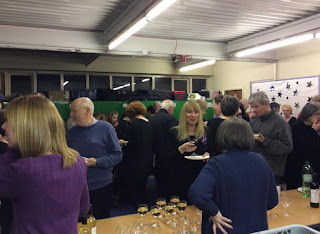 If you were there, and /or you’ve been to one of our other Friends and Family concerts, don’t forget to let us know what you think! Post a comment here.