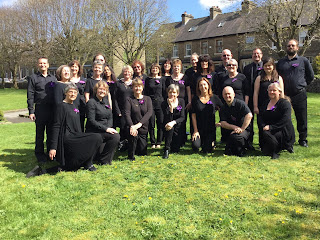 The light shines through the window at that back of the church, casting a pool of brightness on those of us at the front. Will we do the Shakespeare one, we wonder?   “Sometimes too hot the eye of heaven shines,” he tells us. What a sharp contrast to the very first time we performed at the Buxton Fringe, when a sudden storm brought us our audience as folk rushed for shelter.

Actually, it wasn’t too hot. It was just right. Look at the photo we managed to take outside.

“Those of us who are kneeling had better stand at the back. We don’t want them seeing our wet knees.”

There was no need. It was actually warm enough that by the time we started our performance the dampness had gone.

What an obedient audience, we thought – or at least hoped. We’d said doors would be open by 2.45 and by 2.40 there were only the helpers and one guest. We needn’t have worried. Everyone else was outside enjoying the sunshine. By 3.00 p.m. the middle of the church was pretty full. There were many familiar faces in the audience. The friends of St Mary’s Church are now our friends. They always look after us so well.

I spot a Buxton Fringe badge. “We meet at last,” says the wearer.  It is Keith Savage who  is the Buxton Fringe, and who reviewed us and highly commended us two years ago. We’ve exchanged several emails over the years. Keith and the people who run the Fringe are always so helpful and enthusiastic, too.

Once again, it is quite magical performing with the people we rehearse with every Tuesday evening. We don’t stand in our parts and Jeff only conducts I Say a Little Prayer. We have to do a lot of counting and really end those phrases well. Someone writes in the comments: “Lovely professional sound and clear diction.” We manage then? We are helped also by the warmth of the audience. On the whole, also, I think we rather like this new regime of being “scattered”.

It is a real privilege to help St Mary’s start their centenary celebrations. They have a whole series of events and have produced a pretty little post card. Well worth a visit.

Cake, of course, is also glorious. What a spread!
“Hope you get home all right,” says one of the church members. “There’s snow predicted.” What?  Perhaps we need to refer to our mate Bill S’s words again. “Rough winds do shake the darling buds of May.” Well, it’s not May yet, actually, and Buxton is pretty high up.

We don’t sing the Shakespeare song. Not this time.

There isn’t a problem with snow either. The drive home is glorious.
Posted by Gill James at 01:03 No comments: