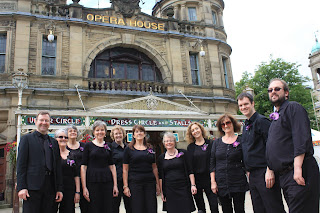 It was lovely to be again in this pleasant historic town in the High Peak. The people in Buxton really do get behind both the main festival and the fringe. Ten days before our concerts (United Reformed Church at 11.00 a.m. and St Mary’s at 3.00 p.m.) two of us popped over to the town and distributed leaflets.
Theresa had the crafty idea of handing over the bigger posters with the blu-tak already attached.

“Could we put up one of our posters?” she asked in one of the shops we visited.

“Well, you can give it to me and I’ll put it up,” said the shopkeeper a little sternly. The sternness disappeared after he had quickly read through the details. His eyes lit up. “Oh yes. I heard you sing last year at St Mary’s.”

“Come again this year,” we both said.

No-one said no.  Every shop and café or other sort of business took one of our posters or a bunch of flyers. We even put one through the door of a music shop that was closed.  We scribbled a friendly note on the back. We were pleased at lunchtime on Saturday to see that they were displaying it.
We don’t know of course who came because they saw a flyer. We have a vague idea who were family members and friends. There were certainly strangers in both venues though some familiar faces too. We took about £400 on the doors and sold twenty tickets electronically. The United Reformed Church only had seven spare seats. If people hadn’t been sitting in the lounge area at the back the main area would have been full. The main part of St Mary’s was full and a dozen or so people had to sit in the aisles. We made gallons of tea and we and our audiences consumed pounds of cake.

“Do they come for the music or the cake?” I asked another tenor.

“Both I should think,” he replied.

Who are all these people, we wondered. It’s always a little nerve-racking, not knowing whether or not you’ll get a decent audience. We got two delightful audiences, in fact.

“The acoustic is different here,” Jeff warned us as we started our warm-up at St Mary’s. “Feel it now.”
At both places we sang a variety of new material and well-established repertoire. I noted some enthusiastic applause for both Royals and One Day Like This. Several people closed their eyes as they listened to the lullabies and the silly love songs. There were tears from a few as we sang In Remembrance. We finished with Kiss the Girl and Build me Up Buttercup each time. I thought we gave these two a lot of energy.

And what did our audience think? Well, it says in the Guest Book “A Cappella and Cake – What a lot of fun! Hugely enjoyable.” Perhaps my fellow tenor was right then.

We were helped enormously by Mary from the United Reformed Church and Eric and Eric from St Mary’s. Yes, the people of Buxton really do get behind this vibrant festival. We love being part of it.

And here's what the Buxton Fringe reviewer, Carol Bowns said.
Posted by Gill James at 04:50 No comments:

“Come along,” we said. “It’s a great day out. We’re always lucky with the weather.”
Ah. By 11.30 we weren’t so sure. The ground was sodden. It was still raining, raining, raining. There were puddles everywhere. “Bring an umbrella and some wellies. We'll be singing in the rain at 12pm at Swinton Grove Park Family Fun Day!” we’d been warned earlier.

We did. We squelched along.

We met under a gazebo and tried to remember all those ones we know that feature rain. Oh yes. Lines and titles: Torrents in summer, I think it’s going to rain today, Full rain full rain, Soon it’s gonna rain   And others. Enough people had umbrellas. Could we improvise Singing in the Rain?

Thank goodness for the excellent tea room in Elizabeth Gaskell’s House.    Seriously. Wonderful cake at £1.00  a shot and beverages, too, at the same price. All those tempting second-hand books. We sheltered there and awaited further instructions.

The Lord Mayor of Manchester arrived. We were ushered back. And it had stopped raining! Was that some blue sky we saw? Better do Blue Skies, then. We did.

We did a set including I Got Rhythm, Blue Skies, Build Me up Buttercup, Deep River, Can’t Help Falling in Love and  Kiss the Girl,  We were invited to eat. It was warm though still overcast. People began to arrive. The atmosphere we’re used to there began to grow.

There was a falconry display team there and quite a few of us spent the time admiring these magnificent birds. We were invited to touch them. Their feathers are surprisingly soft and they are very tame.
Some brave souls risked an ice-cream and some dressed up in items provide by the Elizabeth Gaskill House.
We decided to busk for the second set of songs which included One Day Like This, Buttercup (again) Viva La Musica! and the Here, There, Everywhere /  Long Riding Road medley. We were quite close to one of our favourite spots in the park: a grassy knoll near a big tree.

“Do you realise,” I said to another of the tenors, “we first performed Long Winding Road here?”  It was actually a little too muddy for us to stand in the exact spot where we’d sung it the first time we were here.
Jeff wasn’t with us this time but assistant musical director Daisy guided us well. Hoorah!

The birds flew for us just afterwards and the Elizabeth Gaskill House was open free of charge. Hey, they have a Broadwood Boudoir Grand and you’re allowed to play it if you can. The park seemed as full as folk as even despite the dampness. No such thing as bad weather, then, only bad clothing. It was all fine with wellies.
Posted by Gill James at 13:02 No comments: