The Week of The Events


The email came out of the blue. Would we be willing to sing at one performance of The Events, week including 22-25 October? It would mean learning a few new songs, presenting one of our own and attending two rehearsals – one with all of the choirs taking part and one just before our performance. We decided we couldn’t turn this down but it sounded like a lot of work.
It created a lot of work for us, indeed, but not hard work, just pleasant work.
We were able to enjoy having a whole day’s workshop to go over the songs. What nicer way of spending a Sunday than singing with friends?
It was fabulous meeting and working with four other choirs. At the joint rehearsal we were given enough of the plot that we knew how our performance would fit in. At our individual rehearsal we were given a little more. But we were never given enough that we couldn’t be as surprised as the rest of the audience. There was one little bit that we didn’t rehearse at all and had to give a totally improvised performance. I won’t say any more in case the play tours again. But those of you who were there know what I mean.
Using a different community choir for each performance is brave but works. We enjoyed ourselves and we contributed to the total effect of the play. We’re sure the other choirs did too. In fact, we know so. Three of our members have sung with three of the other choirs and we can’t imagine the fourth one would be an exception.
Generally it is all very relaxed. We don’t have to act; we just have to be natural. Of course, though, we’ve polished the music up – both at the rehearsals with the theatre company and at our own.
David Greig’s play asks how far forgiveness can go in the face of atrocity within your own community. It’s reasonably abstract with the main character, the priest Claire, being played by Derbhle Crotty. Clifford Samuel plays all other parts including the boy who has shot several members of Claire’s community.
The set is convincing as the type of place where a community choir would rehearse – complete with urn and institutional teacups. Ten lucky choir members do get a cup of tea part of the way through. Yet this is only suggested and so the set is easily able to become other things too: a prison, a maternity home and a psychiatrist’s surgery. The play has toured extensively and had just come back from the States when we started the week’s rehearsals.
It was voted best play of 2013 by the Guardian’s critics.
Home, where the performance took place, is eventually going to replace the Cornerhouse and will also be the new venue for the Library Theatre. It will have five screens instead of the present three and will also have more gallery space. But actually, it’s not finished yet and current productions take place in a disused office block. This rather suits this play somehow. What might be described as a foyer is itself like the set for an Agatha Christie play and has a good view of part of the Manchester skyline. It was exciting and relaxing at the same time, sitting there, watching the remnants of last week’s hurricane outside and waiting for the super-rehearsal to begin.


Mysterious, elegant, romantic – the Palace Hotel, Oxford Road, built in Manchester red brick, shouting “I am here” with its iconic clock tower, is a place anyone who wants to appreciate Manchester should visit. At just after 6.00 p.m. on Saturday 11 October 2014 men in smart evening suits and ladies in lovely dresses abound and not all of them are associated with the event we’re supporting, though those guests are certainly dressed for a grand occasion. 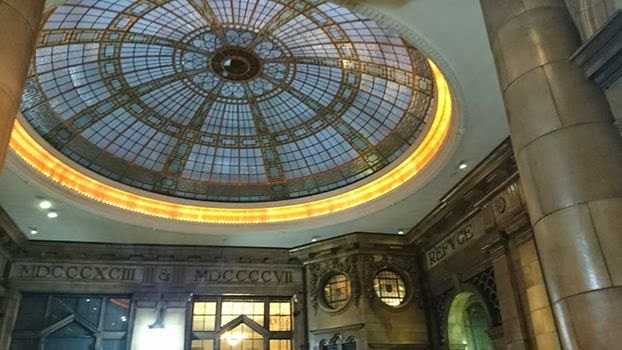