It’s that time of year again. Well Dressing, Road Race, Carnival, Festival and Fringe Festival. We’ve won an audience in the past because people have been glad to get indoors away from the rain. This year they might have wanted to get out of the heat. We conjured up good weather as well this time.
It’s almost becoming a tradition now that we start off singing at the Palace Hotel. “Ah, yes.  You’ve been here before, haven’t you?” they say when I call to ask if that is still all right for this year. There’s a handy alcove in the reception area. It snuggles into the stairwell. The sound is good there.  If you look up during Blue Skies you think you are staring at the heavens.
From here we can be heard in the bar, the lounge, reception and even outside. A few onlookers are curious and take a leaflet. We spend about forty minutes singing. It’s a good warm-up for the main event.
We have quite a bit of free time this year and several of us find a shady spot in the PavilionGardens to eat our picnic and to go over the words of Board Walk again. We allow ourselves plenty of time to get to St Mary’s Church, Dale Road. On the way, we give out our few remaining leaflets to those people who looked as if they would like to escape the heat or the noise of the Carnival. Later, we think we recognise some of them in our audience.
At two o’clock, the church is open. We quickly line up and run through a few bits and pieces. Then we set out the cakes we’ve brought along. We’re helped by people form the church. They look after us so well at St Mary’s. They’ve even put some Buxton water in the fridge for us. “You’re our longest-standing Fringe customer,” they tell us. Well, that’s something to be pleased about.
Soon, we have to scurry “backstage” as our audience begins to arrive.
There’s a respectable number of them and they are appreciative. The hour goes by incredibly quickly. After five songs we might wonder how we’re going to fill the remaining half hour, and then Jeff pulls out another one and another one. This time he links them in threes: three American ones, three spirituals and just three that go together. Suddenly the clock says five to four and it’s time for our last number.
We’re very privileged to be able to sing in two acoustically splendid buildings in one day.
It’s time for the all-important cake, home-made by our members. It is a good spread, enjoyed by audience and choir alike. There’s just a respectable amount left over for church members tomorrow.
It’s been good to be in Buxton again. It is good to relax, too, at the Fallow Deer on the way home where quite a few of us enjoy a very reasonably-priced meal. They look after us well, too.
So thanks to all: Buxton Fringe, Fallow Deer, Palace Hotel, St Mary’s Church and of course the choir and Jeff.
Posted by Gill James at 13:18 No comments:


It was even hotter today. And there’s not a lot of shade on a race-course. We did manage to find a few seats under some umbrellas and it was very pleasant chilling out between sets, keeping cool and chatting. There was a bar, but no one went for the Pims at £5.00 a portion. Other drinks were much more reasonably priced.

One of the coolest places was inside the Pavilion where all of the live musical entertainment took place. This offered us a fine opportunity to listen to some good music.
We were invited to sing at Co-operative Family Fun Day. We’re pleased they asked us. We’ve sung for them three times before at Christmas but this is the first time at a Family Fun Day.
It was the first glimpse of many of us at the inside of a race-course and few had realised just how close this particular one is to the centre of the town. It was fascinating coming across the vocabulary associated with horse-raining on this afternoon when something so totally different was happening.
We actually rehearsed in one of the changing rooms which also doubled up as a place where we could leave non-valuable items. There was just enough space for us all to get in though a couple of people did opt to sing in the shower. The sound was amazing.  Could we repeat it, though, in the bigger space?
We completed two sets of about twenty-five minutes each. The Pavilion holds a lot of people and for both performances we had a respectable and appreciative audience – even if they had only come in for a drink and to get out of the sun. Was it my imagination or were there more  people there for the second set? Certainly there were people on every row if not every seat. True, the sun was possibly at its hottest by then but I even had the impression they were listening a little harder. Had our reputation gone before us? Or was it just the heat?
We tried to replicate what we’d done yesterday but really the area was too exposed to sing in for long. However, we did join and entertain the ice-cream queue again. With Teddy Bears’  Picnic. Could we get gigs at theme parks entertaining the queues? That could be fun – singing on the rides as well, maybe. We’re game for most things.
One or two from the queue joined in Teddy Bear but one young girl looked highly uncomfortable. I hope we didn’t scare her too much – though we do intend to scare with that one.
Yes, the second set was rewarding. Three young lads sat on the front row and Jeff let them choose whether we should sing How much is that Doggy in the Window, Teddy Bears’ Picnic or Nellie the Elephant. They opted for Nellie so there was a bit of galumphing.
A few rows back some very elegantly dressed older ladies seemed to enjoy our little show.
We did something a little different with Longer this time: our regular soloists – Ann, Ella and Susan all sang together. It worked rather well and gave some volume to the solo part.
Was the icing on the cake when one of the older ladies stood up to clap?
Well we’ve worked hard this weekend but it’s all been great fun.  When’s the next one? Oh, yes, Buxton next week. 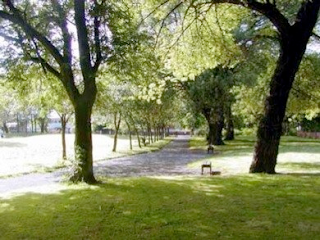 A grassy knoll, shaded by trees. Girls dressed in bee costumes, giving out wildflower seeds. An ice-cream van, a fire-engine and a bouncy castle. Games galore. And perfect weather for the Family Fun Day.
This was the start of a busy weekend for the Ordsall Acappella Singers. We helped to start the day off by singing just after the mayor had opened the event. We then moved as a group around the park and serenaded the various sideshows – and of course, the queue for the ice-cream. The Gaskell Society wanted a picture of us in front of the house. We were happy to oblige and each held up a leaflet. However, it did mean that one of their members had to stand in the middle of the road to take the photo. That was a little scary.
We are looking forward to visiting the house, which is right next to this delightful little park, when the renovations are finished. We hope we’ll get to sing there.
The Friends of Swinton Grove were generous and provided us all with a healthy home-made burger lunch.
It was a lovely afternoon. There was just enough breeze and enough shade to make it pleasant and not too hot but also enough sunshine to invite local families into the park.
We performed our final set on the grassy knoll in the shade. For most people we were just a background sound, hopefully a pleasant one. One young girl, about eleven or twelve I’m guessing, seemed fascinated and followed us from spot to spot. I hope she’ll get to join a choir one day.
We hope we pleased the people who listened. We certainly enjoyed ourselves.
Posted by Gill James at 03:07 No comments:

Mouths and Eyes: a Month of Rehearsals June 2013


“You’ve got to imagine you can put a pencil in the gap,” says Jeff. “Everybody’s mouth should be exactly the same shape.”  It’s one of our next steps. The diction, the musical sound and the phrasing are coming along nicely.  Now we’re sharpening vowel sounds and getting some brightness. We need good clear “ohs” and “ahs” with tight round lips and yawned-open mouths. Out with the “eees” and “eeuhahs”. The former happens sometimes if you try to smile with your mouth and sing at the same time, the latter when you don’t hit and hold the note. The smile must be in the eyes and in the sound as you sing at the top of your mouth. Advanced stuff, this. 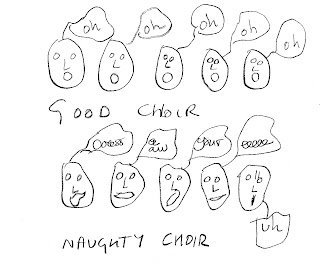 I’m reminded as a former language teacher of trying to get learners of German to pronounce the “o” properly. This could be a matter of imagining a Hula Hoop or Polo Mint in the gap the lips make. The “ű” was just as challenging – like whistling without pushing the air.

We continue sharpening up our repertoire and polishing the newer songs. Now that we are getting more gigs we need some newer material. It’s quite a balance – enough performances to make it matter but not too many that we can’t have the rest of our lives nor have time enough to rehearse.
One solution perhaps was our performance at the Eye Hospital in Manchester. We performed, in our black with a touch of purple, to the small select audience of the evening’s footfall. It was a dress rehearsal as well for our forthcoming performances, including the one now completed at Dunham Massey. Though the audience was small it was appreciative.
By the way, we could do with a few more male tenors and bases. Any willing chaps reading this?   Get in touch if you’re interested!
Posted by Gill James at 02:12 No comments: