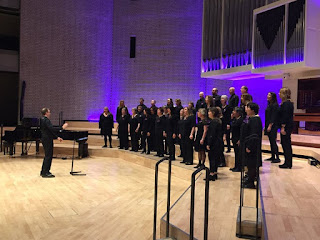 "It's so nice to perform without the pressure of a competition," was the refrain.

Even within this sample of just six choirs there is such variety and each one is a delight to listen to and watch.  There is energy, control, clear sounds, precise harmony, professionalism and fun.
Sunday comes and now there are nineteen choirs. As ever the RNCM is buzzing. Colourful costumes dazzle us. Choirs are ushered in and out of rehearsal spaces and green rooms, then on and off stage. Everyone's a little bit nervous and very excited. It all runs like clockwork. Volunteers aid and control us. There is another big event taking place. This building works well.

We perform early on. Our three very different pieces work well for us and we rather take the judges by surprise as first of all we move down to be closer to them for our last song and then, on the very last line, our male tenors storm their desk to deliver "Tell me you do!"

Each choir is given feedback straight after their performance. The three judges take it in turns. They give us all some positive notes first and then tell us what we can do to improve. I suspect for the latter they're highlighting what will make the biggest difference for next time. They have a hard job. Hours of concentration. The standard goes up each year. Every choir that we managed to watch had lots of good points.

As the afternoon draws to a close the auditorium gets fuller and fuller. The atmosphere electrifies. Those who have to wait longest to perform have the compensation of a full and totally engaged audience.

The variety is delightful. What a nice way of spending a Sunday – performing together with friends, having lunch together and then relaxing and watching lots of  good singers.

Well done to the winners and runners up!

It is over all too soon.

Getting ready for the MACC

Our first rehearsal after the Christmas break ends with a flash of lightening and a clap of thunder, almost simultaneous, and just after Jeff  has said, "I've worked you hard, haven't I?"  Yes, you have Jeff.

When we get out to the car park the ground and our cars are covered in snow. We slip and slide our way home. Some of our members who live far north of the city have not made it to rehearsal. I don't blame them. I hate travelling in the snow.
Yesterday it tries to snow all day. It finally manages to do it properly at about 3.00 p.m. Oh dear. Great big flakes and it's now settling on the road. Then suddenly at 3.45 it stops and the sun comes out. We all get there and our rehearsal room is packed.

"Don't get stressed because we're doing some parts over and over," says Jeff.

"That will lose you five points," he says later.

He points out what was wrong. We go through the song again.

We find the positions where we're going to sing in in the competition.

"Here," I call to another female tenor.

I like that though: you can see what he wants you to do and you get instant feedback on what you're doing. "But that's good," I say.

Yes, I know the words and the tune, and I can see the sheet music in my mind. But are my hands in the right place? Is my mouth the right shape? Are those vowel sounds good?  Will I be able to engage with the audience? Have I taken a deep enough breath?

Oh heck. You don't half have to multi-task when you belong to a choir.

They've predicted snow for Sunday.  Get off. With that many people singing, snow doesn't stand a chance.

We're a tad nervous but mainly excited. It's going to be great meeting all of those other choirs at both the concert on Saturday evening and the competition on Sunday.