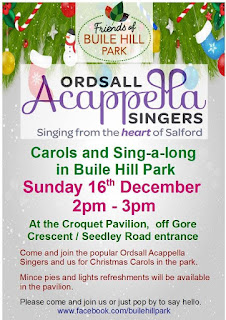 Greater Manchester has a lot of green spaces and Salford has its fair share. Many are in need of a little TLC and it has largely fallen to local residents to take on this task. The Friends of Buile Hill Park are certainly very active. Just look at their latest news. 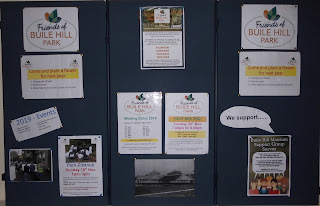 And what a cheery place the croquet pavilion was on a cold dark day before Christmas. Prettily decorated tables, warm drinks, mince pies, Christmas biscuits and Stollen.

Should we sing inside or out?

“We thought we’d leave that open. It depends on the weather.”

“The rain’s not due until three.”

So, outside it was.

We attracted a small but lovely audience. It was mixture of those folk had already been getting everything ready in the pavilion and footfall of dog-walkers, pram-pushers and families out for a Sunday afternoon stroll.

We sang for half an hour, a mixture of well-known carols that everyone could join in with, some other Christmas songs and one or two items from our normal repertoire.

Then we all went indoors for more tea and treats. We gave out song sheets so that everyone could join in with some old favourites like Frosty the Snow Man and Jingle Bell Rock. We were about to finish but weren’t quite allowed to.

“We’ve had a request,” said Jeff. Of course. We just had to do it. The Twelve Days of Christmas. Actions and all.

I noticed one young mum singing with gusto.  We chatted afterwards about the joy of singing. It’s a great pity she’s occupied with a cub pack on a Tuesday.

“That was a lovely cup of tea,” I said to one of the Friends.

I declined but was persuaded to take another slice of the delicious Stollen.

There was talk as we left of doing it again next year or maybe even having a picnic in the summer. Why wouldn’t we?  We love to sing and we love to support other local groups.
Posted by Gill James at 01:25 No comments: