(Hand to Mouth)
Unfortunately, the organisers from the charity thought that this would not be the right time and they wouldn’t be able to create a big enough audience for this event so asked to postpone. It will happen one day. We’ve worked with them in the past and had a great deal of fun.
We and they are sorry for any disappointment. We’ll be back soon! Have no fear.

Everyone knows that Manchester was shaken by the terrible terrorist attack at the Manchester Arena on 22 May. We can’t fail to be touched by it. It all happened not that far away from where we rehearse.

Naturally our thoughts go out  to all those who have directly been affected and like many others we also want to do what we can.


Our rehearsal on 23 May went ahead as usual and was well attended though many of us felt a little nervous if we had to cross town. The rehearsal seemed rather special, in fact.

One Day Like This has become even more special. Fix You was played immediately after the minute’s silence for the victims of the London Bridge attack. These two songs seem really important now.

Business as usual for Greater Manchester means caring but also carrying on with all that is good.

You can also often find details on our Facebook page and we’ll usually put links on Twitter as well.
At most of our events you can get tickets on the door. However, we do recommend getting tickets in advance where we offer this. It helps us and it guarantees that you won’t be turned away at the door. We’ve not had to do that yet but we’ve come close to it.

St James' Church, Church Ln, Gawsworth, Macclesfield SK11 9RJ
3.00 p.m.
This is actually COPS’ own event. Contact them for details. COPS  (Concerns of Police Survivors) is a charity that supports the families of police officers who are killed whilst protecting the rest of us and this event is specifically to do with the Westminster attack.
Oh, and we will be providing cake!
Gawrsworth is a really beautiful setting.

As we have done for the last few years, we’ll be opening this event at around 12.00 noon. It’s always a fun event and even though we squelched around in the mud a little last year, it stopped raining just in time.
Find Swinton Grove Park here:

We’ll be singing at about 1.00 p.m. and 2.15 on both occasions, though watch out for updates on this newsletter. If you’ve not been before the Victoria Baths are well worth a visit.
We now are singing there regularly a couple of times a year. You can read about our previous visits here.

We’ll be singing at our usual two venues:
United Reformed Church Buxton 11.00  a.m.
St Mary’s Church Buxton 3.00 p.m.
Book your tickets at www.ticketsource.co.uk/ordsallsingers/events If this link doesn’t work copy and paste it.
Tickets: £5.00 full price, £3.00 concessions, children under five free, family ticket £12.00 (up to four people, one of whom must be a concession)
Also with cake. Naturally.

I’d like to add here that we had a great time in April when we performed at St Mary’s as part of their centenary celebrations. You can read a full report here.

This takes place in Ordsall Park Salford. We’ll be performing at home, in effect. It’s always good to remind ourselves of where we come from. We’re not sure of exact timings yet but it will be sometime in the afternoon.

We’re already looking to the autumn and winter. Dates will no doubt soon fill up.

Did we say, some of us went to Cyprus with Blackburn People’s Choir? Well, we did. It was good to work with our friends. We’ve known them for quite a while and now some of us know some of them a little better. The sun was nice, too.
Read more about it here.

Happy singing and listening, everyone.
Posted by Gill James at 01:59 No comments: 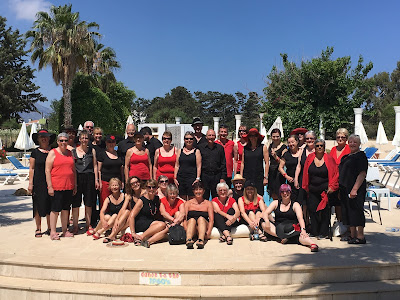 Manchester Airport, early – very early – 27 May 2017. You can spot fellow joint choir members a mile away. It’s all that red and black. It looks so smart. It’s all so exciting.

And didn’t they find out? The singing began as we waited at the gate to board the plane for Istanbul. This set the tone for the rest of the trip. There was a lot of singing. As well as the rehearsals and concerts we sang after meals in restaurants, as we walked through the streets of Famagosta and at other airport gates.

But oh, the joy of international travel.
“Do not worry, Madam,” they cried.
“We’ll upgrade you to business class.”
But then they stuck me back in economy.
Complimentary upgrade, my arse!

Well, the power of music, you see. We all got there, worked and played hard, and got back safely home again.

Gwe –en! Are we nearly there yet?

Gwe-en! This holiday’s all right. Beat. What’s going on?

To plan this itinerary was the one and only Gwen.  And Oh! What a job she’s done.

Mountain View, you will last for the rest of our lives.

And what did this joint choir do?

In Salamis they sang from their Schlik,
In Kyrenia – raised cash for the sick
In old Famagosta
A great belly buster
Brought comfort to the wise and the thick.

Much of the above comes from a competition Gwen organised. Folk were invited to write a catch-phrase to encapsulate what this venture was all about. There was a very loose interpretation of “catch-phrase” and some very clever pieces emerged. Other words were simply overheard on the coach.
I asked a few people what the highlights of the trip had been.


In fact, every single event was named by someone.

For me personally a great moment came as we walked off the stage at Famagosta and were warmly congratulated by the university choir who were about to come on. They know what we’re about so well. (I Know Him So Well) Language barriers or divided countries didn’t seem to be an issue in that moment.

We sang One Day Like This and listened to the heart-felt applause after Jeff explained the connection with Manchester and why this song was important right now. That certainly brought a lump to the throat. A children’s choir also performed and were in the audience. Always, they started clapping as we were finishing the last bar of the piece.

A warm, warm audience, in any case, and another performance at the concert was by a trio: an Armenian, a Greek Cypriot and a Turkish Cypriot. No doubt everyone in that theatre wishes upon the same bright star and sleeps under the same big sky. (Somewhere Out There)

There was that moment too as we sang after lunch when in the middle of Somewhere Out There, a bird flew out. Several people were in tears.

Perhaps though the “friends abound par excellence” was the most important point. Ordsall A Cappella Singers and Blackburn People’s Choir have known each other for quite a while and even share a few members. Now we’re getting to know each other a lot better. And our voices are beginning to blend more closely as well.
Posted by Gill James at 06:56 No comments: